What is Cystic Fibrosis?

CF is a genetic disease that affects approximately 35,000 children and adults in the United States and Canada.

CF is caused by a faulty gene called the cystic fibrosis transmembrane conductance regulator (CFTR). This gene makes a protein that controls how salt and water move in and out of cells in the body.

In CF, the gene does not work properly and causes the body to produce very thick and sticky mucus and very salty sweat. The mucus clogs up the lungs, leading to life-threatening lung infection and breathing difficulties.

The mucus can also clog the ducts of the pancreas. This prevents digestive enzymes from reaching the intestine, where they normally help break down food for absorption. This leads to nutritional problems and poor growth.

Thickened secretions may also cause liver problems in patients with CF. Bile secreted by the liver to aid digestion may not drain adequately, leading to liver damage. Over time, this can scar the liver. 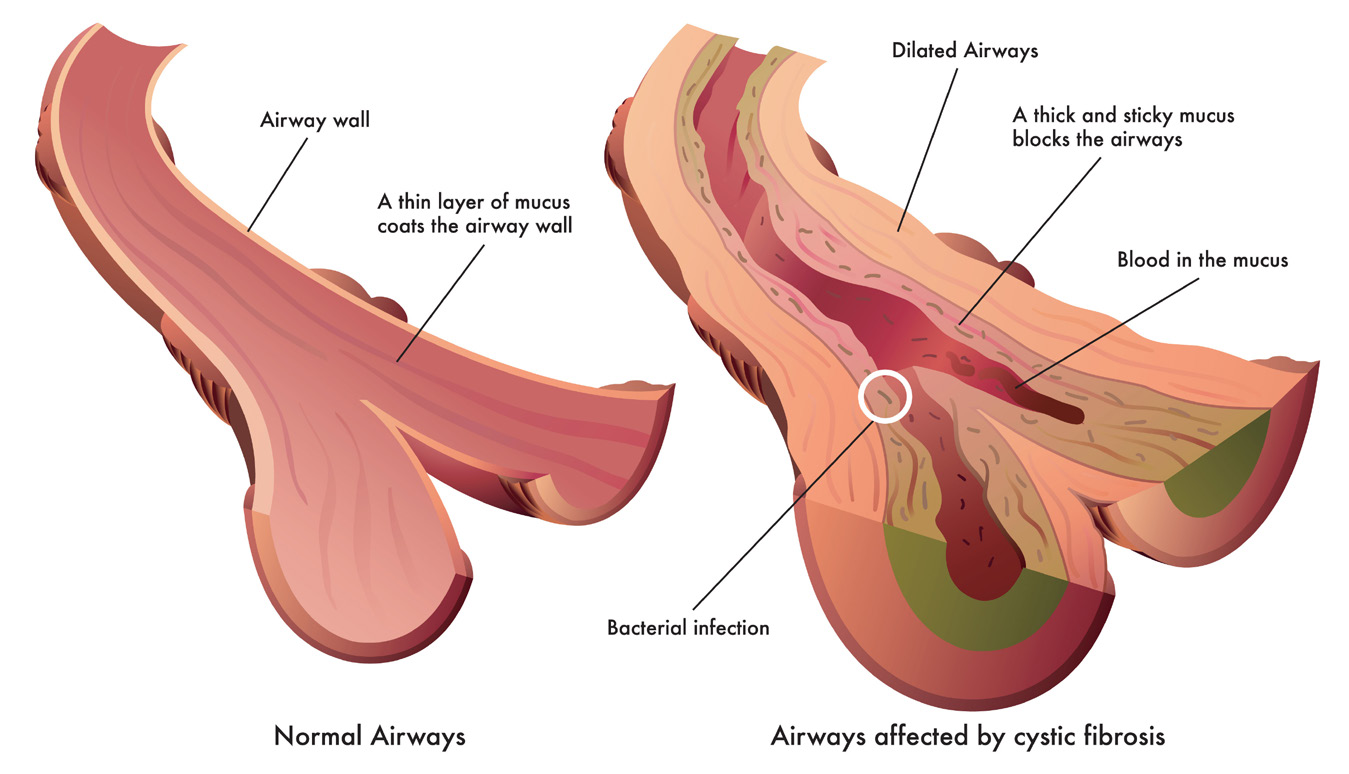 How is Cystic Fibrosis diagnosed?

CF can be diagnosed many ways. It is often a combination of a complete clinical evaluation, genetic testing and a sweat chloride test. Most children are screened for CF at birth through the new born screening test. Genetic tests can be done either during pregnancy or after birth to diagnose CF.

The sweat chloride test is a safe, painless and effective way to diagnose CF. This test measures the amount of a chemical element called chloride in the sweat. Patients with CF have high levels of chloride in their sweat compared to those without CF.

Why is nutrition important in Cystic Fibrosis?

Good nutrition is crucial for people with CF. It begins at birth and continues throughout life. Up to 85% of patients with CF cannot produce the enzymes needed to digest and absorb fats, proteins, and starch (called pancreatic insufficiency). The failure to digest (maldigestion) and absorb (malabsorption) food, nutrients, and vitamins leads to poor outcomes in patients with CF.

Symptoms of maldigestion and malabsorption may include:

Is maldigestion/malabsorption the only reason why Cystic Fibrosis patients have problems with nutrition?

Maldigestion and malabsorption are the most important reasons but not the only reasons. Patients with CF require more calories than other patients. This is usually because of increased energy demands due to coughing, increased work to breathe due to chest problems, and repeated infections. Because of these reasons, the body needs more calories to breathe and fight infections.

What are the main nutritional problems in Cystic Fibrosis?

What can be done to help Cystic Fibrosis patients digest and absorb food better?

Most CF patients take pancreatic enzyme replacements that assist in the digestion of carbohydrates, fats and proteins. These enzyme supplements are taken with every meal and snack to help patients with pancreatic insufficiency digest and absorb their food better. These enzymes come in small capsules containing beads with digestive enzymes.

There are many different brands of enzyme. Your doctor and nutritionist can help find the right enzyme and dosage for your child. These enzymes improve absorption of food and nutrients and help your child gain weight. They may improve liver function in CF patients who have associated liver disease.

How and when are the enzymes taken?

Enzymes should be swallowed whole just before meals or snacks. In an infant or small child who cannot swallow capsules, the capsule can be opened. The capsule’s contents can then be mixed with a small amount of applesauce in a spoon and fed to the child. The pill should not be crushed, chewed or taken with hot drinks as this might make it less effective.

Are enzymes required with all meals and snacks?

Can there be signs of maldigestion/malabsorption even when taking enzymes?

Signs of maldigestion/malabsorption that appear when taking enzymes may indicate that the dose needs to be adjusted. Talk to your doctor or nutritionist before changing enzymes, since there could be other reasons for your child’s symptoms.

How long do enzymes work?

Enzymes work for about one hour after taking them.

Are generic enzymes just as good as brand-name enzymes?

No. Generic enzymes generally have less activity than brand-name enzymes and don’t work as well. Do not use generic enzymes.

Are enzymes all that is necessary to improve nutritional status of Cystic Fibrosis patients?

No. Enzymes are important, but good nutrition is also critical for CF patients at all stages of life. Good nutrition helps maintain normal growth, weight, and height. Good nutrition also helps keep the body strong to fight infection and maintain healthy functioning of many important organs including the lungs, pancreas and liver.

What is the recommended diet for patients with Cystic Fibrosis?

Do all patients gain weight with a high-calorie, high-fat diet?

It is sometimes impossible to eat all the calories needed for proper growth and weight gain to stay healthy. In this case, your physician or dietitian may recommend supplemental tube feeds to provide required calories to your child.

Tube feeds are used to supplement calories but do not replace eating. They are often given at night while your child sleeps. This is usually either through a long thin tube passed through the nose (nasogastric or NG tube) or inserted directly into the stomach (gastrostomy tube or G tube).

Vitamin supplements are crucial for patients with CF, especially fat-soluble vitamins A, D, E, and K because they are often poorly absorbed. Even when a CF patient is taking enzymes, supplements are needed to prevent vitamin shortages.

Is nutrition the same at all ages?

Different age groups have different nutritional needs. Your doctor and dietitian will help answer questions and concerns regarding CF and nutrition throughout all phases of your child’s life.

What are the effects of Cystic Fibrosis on the liver?

Treatment of the respiratory complications of CF has improved along with life expectancy. Now, CF-related liver disease is increasingly important and is the third-leading cause of death in CF patients.

Patients usually have signs of obstruction of the bile ducts. This can progress to inflammation and scar the liver.

Liver injury symptoms include malnutrition and fat-soluble vitamin (A, D, E, and K) deficiency, yellow discoloration of the eyes and skin (jaundice), enlargement of the liver or spleen, and development of gallstones. In advanced cases, patients can develop liver scarring (cirrhosis), which can progress to liver failure and require transplantation.

The Association of Pediatric Gastroenterology and Nutrition Nurses

The information provided on this site is intended solely for educational purposes and not as medical advice. It is not a substitute for care by a trained medical provider. GIKids is not engaged in the provision or practice of medical, nursing, or health care advice or services. For advice about a disease, please consult a physician.

Established by the North American Society for Pediatric Gastroenterology, Hepatology and Nutrition (NASPGHAN)